Home » Stories from the Field » Crisis update: Women of Syria, eight years into the crisis

Crisis update: Women of Syria, eight years into the crisis

Eight years. Since the start of the conflict, the Syrian crisis has displaced more than 6.6 million people internally and seen more than 5.6 million Syrians scattering across its borders.

The crisis in Syria has devastating consequences for women and girls. From food insecurity to loss of educational opportunities, lack of safe water or health services, and high rates of gender-based violence, women and girls are facing the brunt of the crisis. In 69% of communities, early marriage is reported as a concern.

UN Women is working to address the needs of women and girl refugees, and promote their leadership in conflict-resolution, peace-building and recovery. At 17, Intesar Hassan became the head of her household after fleeing Syria in 2015. She lives in the sprawling refugee camp of Azraq, Jordan, with her ailing father and five siblings.

“The beginning was incredibly hard,” she remembers. When the opportunity came to join UN Women’s cash-for-work program, she took it right away. “I knew this was a way to provide for my family. It was the best choice I have made.” Read more►

Hassan now earns a salary as a qualified beautician doing make-up, hair and nails inside the sprawling camp. Life as a refugee is the new normal for thousands of women like her, and no one knows when they would find another home, or go back to Syria. Finding ways to support themselves and their families has become urgent.

At the Azraq and Za’atari refugee camps in Jordan, UN Women has been providing safe spaces coupled with economic empowerment programmes for women and girls since 2012.

More than 16,000 refugees benefit annually from the four Oasis centres, including over 400 cash-for-work opportunities, child care services, counselling and referrals for gender-based violence. 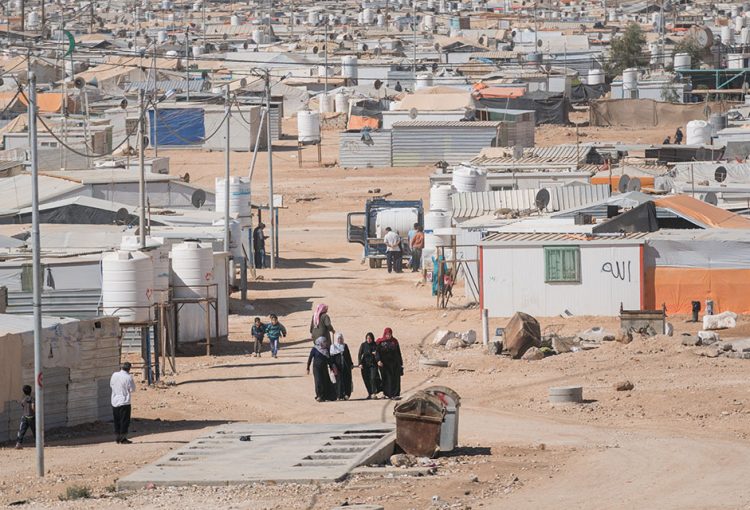 “The tailoring project provides the women with a small haven inside a big, crazy world. When they take a break from tailoring, they laugh, joke and even dance,” says Hadeel Al-Zoubi, the UN Women Senior Camp Assistant at Za’atari. “Empowerment is not telling women what they need. I like to ask them what they want and need… they should be able to make choices.”

One of the cash-for-work programmes produces 1,000 baby kits per year, which are distributed to mothers in the Za’atari camp.

To help women work outside the camps, UN Women, the UN Office of the High Commissioner for Refugees (UNHCR) and the International Labour Organization (ILO), organized awareness raising sessions and job fairs in the Oasis centres, increasing the number of work permits being issued to Syrian women refugees from 3 per cent in 2017 to 11 per cent by January 2018.

UN Women is also working with Syrian refugees in Lebanon, Iraq and Turkey, empowering them to learn skills and earn decent incomes and raising awareness of gender-based violence.

In Lebanon, 2100 Syrian refugee women and Lebanese women and youth from conflict-affected communities have learned vocational skills to increase their incomes as part of the “Strengthening Resilience and Protection of Women and Youth in Host Communities” programme, funded by the Government of Japan. 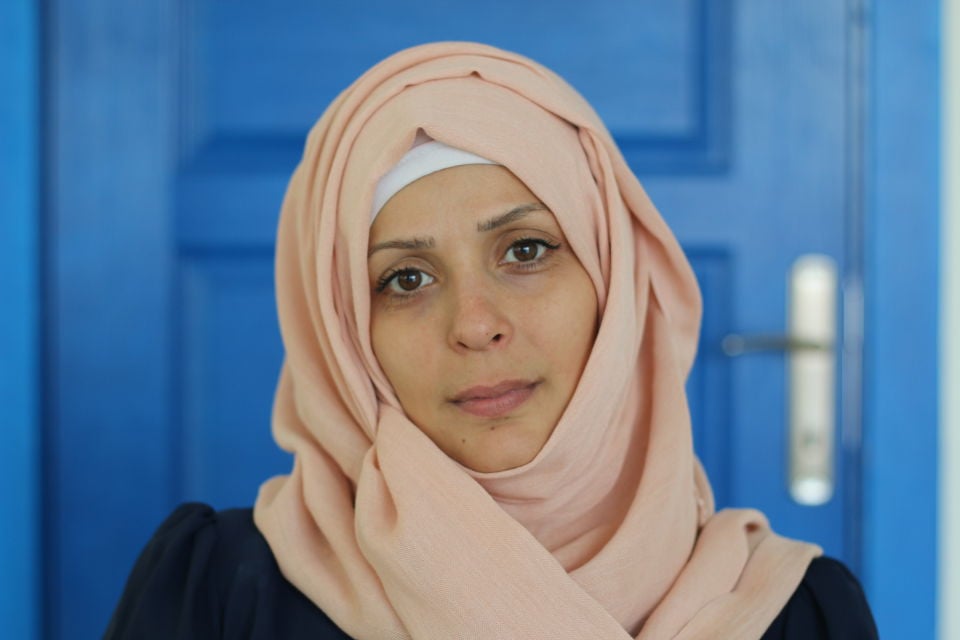 Thirty-year old Menal Suleyman fled Syria with her children after her husband died and barely escaped drowning twice during her attempts to escape. She has found new hope in the UN Women-supported  “SADA Women-only Centre” in the south east city of Gaziantep, Turkey.

“I didn’t know how to use a computer before. Now when I go to class, my youngest boy, Yusuf, attends SADA’s child-care,” she says. Suleyman has taken Turkish language courses and patient registration training, so that she can find work as a medical receptionist. Read more about Menal’s journey►

Retibe Bilal, another Syrian refugee who has lived in Gaziantep since 2013, was divorced by her abusive husband after they arrived in Turkey. She heard about the SADA Centre through a neighbour and received legal consultation and psychosocial counseling. “The Centre helped me build my self-confidence and empowered me. I discovered my abilities, learnt my place in society and about my rights,” says Bilal.

Established and managed by UN Women with financial support from the European Union Regional Trust Fund in Response to the Syrian Crisis and the Government of Japan, the SADA Women-only Centre is run in partnership with Gaziantep Metropolitan Municipality. The centre offers vocational and basic skills trainings, language courses and counselling to help refugee women access decent work opportunities. It also provides psycho social support and guidance to benefit from local services on employment, gender-based violence prevention, health and education. Since the Centre opened its doors in September 2017, close to 2500 women and girls, mostly Syrian refugees, have registered. “We are here to voice our pains and pinpoint what we share.”

Almost 200 Syrian women leaders  came together to talk about how to advance women’s rights in Syria in a conference in Beirut, Lebanon, from 25–26 June 2018.

Convened by UN Women, the conference was part of its advocacy and coalition-building with Syrian women leaders and activists since 2014.

In February 2016, the first-ever Syrian Women’s Advisory Board, comprised of 12 independent civil society representatives from diverse backgrounds, was established. They consulted regularly with the UN Special Envoy for Syria and included formally in the peace talks. Six members of the Advisory Board came from a group of Syrian women leaders who had come together at an meeting convened by UN Women when the Syrian peace process first started.

“We come from diverse and opposing backgrounds, but we were able to build consensus based on our common agenda for peace,” said 58-year-old Monira Hwaijeh, one of the 12 members of the Syrian Women’s Advisory Board (SWAB) when she spoke to UN Women.

According to Hiba Qasas, Programme Advisor and Head of UN Women’s Arab States Section, coalition-building with and among the women of Syria is key: “UN Women has been advocating with the women of Syria for their rightful role as voices of peace, building their leadership capacities, convening women from diverse backgrounds and opinions, and supporting them in the process of identifying and unifying around a common agenda for peace.”

In the words of  Insaf Hamad, another member of the Syrian Women’s Advisory Board: “We, the Syrian women, can—and may well be—the backbone of Syrian peace and reconciliation.”

Empowerment through employment for Syrian refugee women in Jordan At Za’atari, Ghada Um Saleh, 48, faced challenges when she arrived at the camp. With five children to support and a husband who was unable to work, Saleh was desperate to find work. She enrolled in the centre’s cash-for-work program and trained as a tailor. She recalls having much to learn when she first started at the Oasis, but with time she began to excel. “The Oasis gave me courage, and the skills to be a good tailor.”

After a year of honing her tailoring skills, Saleh sought work outside the centre. She had the necessary skills to get a job in the tailoring industry, but she, and many other women, were unaware of how to secure a work permit. Only 3 per cent of the work permits issued to Syrian refugees went to women in 2017. To fill this gender gap, UN Women, in partnership with the UN Office of the High Commissioner for Refugees (UNHCR) and the International Labour Organization (ILO), began hosting awareness sessions and job fairs specifically geared towards women. Saleh is now employed by Jerash Garment Factory, and, as of January 2018, 11 per cent of the work permits are going to women refugees.

Saleh’s story is just one example of the 405 cash-for work opportunities provided by UN Women each day in Jordan. In addition to empowering women through employment, the Oases childcare services benefit 400 children daily and refer an average of 75 refugees to counselling and protection services each month. With the generous support of the Governments of Australia, Finland, France, Iceland, Italy, Japan and UN Women National Committees, the Oases support 16,000 refugees every year.

“As the number of female-headed households is on the rise among Syrian refugees residing in Jordan, it has never been more important to ensure that our collective response reaches and empowers women,” said Ziad Sheikh, UN Women Representative in Jordan. “The Oases have been recognised as highly successful models with proven results and impact for women in generating income and creating an enabling environment for their own empowerment.”

Moving forward, the Oases will integrate their remedial education with their business development and job placement services, to equip refugee women with the skills and knowledge they need to start a small business or secure decent work in the future.